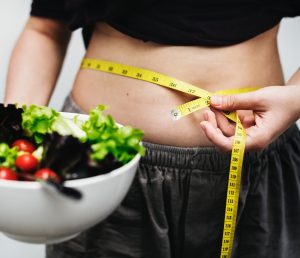 If you’ve put on weight around your middle, you probably have visceral belly fat. Not only is visceral fat the most dangerous type of fat, it’s the hardest to lose. It’s linked to cardiovascular disease, diabetes and even Alzheimer’s. Unlike subcutaneous fat that’s directly under the skin or intramuscular fat sprinkled in the muscles, visceral fat is packed around your organs. It’s sometimes called a pot belly or a beer belly and gives the person an apple shape, with the widest area around the middle.

Besides crowding the organs, visceral fat creates other dangers.

There’s been a lot of research that shows visceral fat is more dangerous than subcutaneous fat, because people who have more visceral fat tend to suffer more cardiovascular problems, are more prone to stroke and other diseases, but they also found that it makes more of certain proteins that cause inflammation of organs and narrow blood vessels. That can cause a raise in blood pressure. It can lead to lipotoxicity, which occurs when the excess fatty acids and triglycerides it creates go to the liver where they accumulate.

Not only is visceral fat hard to lose, it makes losing all types of fat harder. That’s because it tends to increase insulin resistance, which makes weight loss extremely difficult, but not impossible. At one time, all fat was thought as just storage centers for energy. However, today they know that fat also secretes hormones and other biochemicals, acting as part of the endocrine system. While subcutaneous produces more beneficial chemicals, visceral fat produces more substances that are bad for the health. One of those is a protein called RBP4 that increases insulin resistance. To make it even worse, visceral fat doesn’t produce as much leptin as subcutaneous fat. Leptin is the hormone that makes you feel full. Visceral fat also doesn’t produce as much of another helpful hormone, adiponectin. That hormone helps protect against diabetes and regulates the processing of sugars and fat.

Keep your stress under control to help lose visceral fat.

There’s a big link to cortisol and the creation of visceral fat. Cortisol is one of the hormones created by stress. Learning forms of meditation and breathing exercise can help. If you’re stressed out, you need to burn off those hormones and that means exercise. It’s about more than just losing weight, it’s about being more active, too. Try to get at least 30 minutes of moderate exercise every day and if you’re completely stressed out, do an intense workout with strength training or take a really brisk walk and you’ll burn off the hormones of stress.